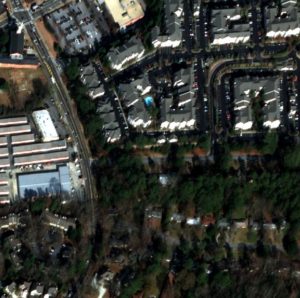 The main purpose of this challenge was to extract building footprints from increasingly off-nadir satellite images. The created polygons were compared to ground truth, and the quality of the solutions were measured using the SpaceNet metric.

Read more about the Challenge winners from our blog!

This dataset contains 27 8-Band WorldView-2 images taken over Atlanta, GA on December 22nd, 2009. They range in off-nadir angle from 7 degrees to 54 degrees.

For the competition, the 27 images are broken into 3 segments based on their off-nadir angle:

The data is hosted on AWS as a Public Dataset. It is free to download, but an AWS account is required.
aws s3 ls s3://spacenet-dataset/spacenet/SN4_buildings/

Each of the 27 Collects forms a separate .tar.gz labeled “Atlanta_nadir{nadir-angle}_catid_{catid}.tar.gz”. Each .tar.gz is ~7 GB

In the SpaceNet Off-Nadir Building Extraction Challenge, the metric for ranking entries is the SpaceNet Metric.
This metric is an F1-Score based on the intersection over union of two building footprints with a threshold of 0.5

F1-Score is calculated by taking the total True Positives, False Positives, and False Negatives for each nadir segment and then averaging the F1-Score for each segment.

The SpaceNet Dataset by SpaceNet Partners is licensed under a Creative Commons Attribution-ShareAlike 4.0 International License.

By clicking “Accept All Cookies”, you agree to the storing of cookies on your device to enhance site navigation, analyze site usage, and assist in our marketing efforts.Accept All CookiesPrivacy policy